A B O U T
In 1989 I was asked, as an artist, to install an exhibition about the IJ-borders. It meant to be a historic overview and I only had eight weeks to realize it. An impossible job if it wasn’t that I had studied archeology for a while and therefore knew how to do historic research. Still it wasn’t an easy nut to crack in that time period.

I wasn’t the only one who was aware of this. Some amateur historians, who were involved in the project, called it nonsense to invite an artist to clear the job, and they were quit surprised when the end-result was much more then they expected.

At the beginning it was just an extra and paid order for me. I only lived three years in , and didn’t know much more about the city – and especially the IJ – than someone else who lived there for such a short period, but I knew my way in historical archives, managed to dig up what I needed and to illustrate the exhibition. Especially the historians were surprised, and admitted this. I was asked to stay with the project which wasn’t just a one time historical illustration of ’s important sea-gate.

The IJ divides the city in two: the old part with the town center and 19th century quarters on the south side and the former agricultural and industrial quarters in the North. This was the capitals stepchild, however close to the center but divided by the IJ it wasn’t easy to approach. A couple of –free- ferries made it possible to cross but the border alongside was mainly a composition of the old and long gone shipyard activity and some pre-fabricated housing facilities. It had to be modernized to cope with the south border and to become really a part of the agglomeration. A group of people saw this and formed the Noordzij (North side) association to work at the realization of re-structuring the northern border. The exhibition, in which I was involved, was just part of a festival to launch the idea among a broader audience.

After my successful introduction I was asked to stay and guide the cultural events the association had planned for the future. I became the official exhibition coordinator, and later the vice-president of the club which wanted to work to an end-conclusion in order to bring attention to the re-structuring of the northern border towards the city and council of . 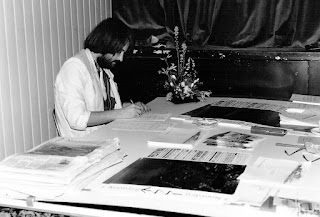 The first festival was strictly cultural, just to bring attention to the subject. The exhibition I was responsible for, and another, done by a different artist which showed artistic views around the IJ-border. Besides the two exhibitions, which were the center of the festival, a lot of street acts were performed, photographed and documented by Kors van Bennekom.

The goal was to organize meetings in order to grab as much as possible ideas and to create an as broad as possible basis in the area. People have to know and to understand why changes have to evolve if you want them to support. The association brought those meetings as close to the audience as possible, organizing in cultural centrums and hotels nearby. Participation was as broad as one could expect: people who lived in the neighborhood, entrepreneurs and local politicians. New ideas were brought in and the discussion around re-structuring came to surface. Based on these meetings an end-conclusion would finally be formulated and brought to attention of the responsible governmental services. 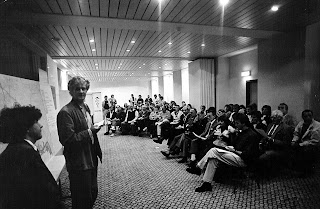 Exhibition in the ferry office

The organization started in one of the cultural centers which was only a temporary location, but moved to the former ferry-office. A headquarters was formed with a small permanent staff and I was asked to celebrate the new location with an exhibition which showed the results so far. 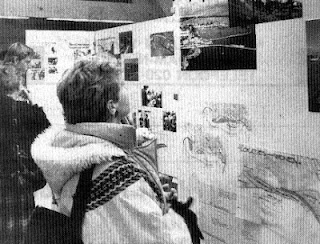 Every initiative located on the border of the IJ was used to give more attention to the project. When Tolhuis, a restaurant and former toll-office, was renovated, the inauguration was a perfect reason to put the Noordzij association in the spotlights again. A meeting was organized framed by an exhibition around the plans and realizations by the organization as was achieved. It was a first preparation for the community to make them aware of the possible results as would be formulated in the end-conclusion. 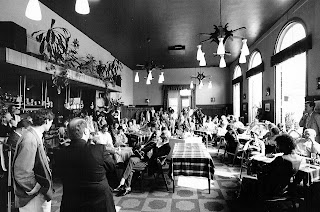 Like a pyramid all the effort came together in a one time and extremely large festival to celebrate the results of, in total, four years of hard work. In the summer of 1993 the Springtij (spring-tide) festival was organized with exhibitions on both sides of the IJ, discussion meetings in boats on the IJ itself, enlightened with all kinds of street manifestations and performances. Architectural plans for both the borders were shown. The end-conclusion was a fact, however not printed yet, but the recommendations were already addressed to the proper institutions. The festival was a gigantic success with a lot of media attention and visitors. It underlined everything the association stood and had worked for. 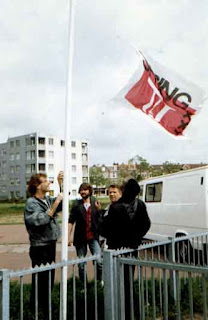 The end-conclusion was presented in a booklet of over a hundred pages text and photos. I was asked to do the layout to make it as attractive as possible. It was something to be proud of, and a lot of the ideas formulated came actually to plans and are realized in the mean time. If you compare the northern border today by almost 20 years ago you see the differences and the huge change the formally industrial IJ-borders went through. 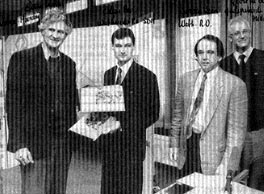