She waved when she left me forever. I didn’t know, and smiled and kissed the distance of divorce between us. A distance which would grow. I never saw her back.
After almost three years. How could I know? Even afterwards I don’t see the signs. She just disappeared…
That last glimpse is etched into my mind. Curly hair, blond, and cut like Marilyn Monroe. Warm laughing blue eyes. A face that looked back to me in love. It’s not what I want to see. It’s how she was. How that moment was.
Still, the leaving was there. In small things. She knew. I couldn’t imagine that I would never see her again, but she did.
Her hair was cut, while I loved her long waving curls. It made her a new she. Fresh and different, which I had to admit. To me she seemed as blossom in spring, and hair grows.
-“When I come back it will be long again”; she assured. I smiled, and looked at the trousers, where I preferred her wearing skirts.
-“It’s more comfortable while traveling.” I nodded.
She defended without me attacking her. I even told her how fantastic she looked. She presented herself in guilt, and I still don’t know why. She could have changed after she left, but decided to show me her new self before stepping into a world I never would know.
Oh yes, I traveled the globe, searching, following her footsteps, asking and tracking, and sometimes I came quite near. She had just left, I heard, only a few days before. I could almost smell her sense, but I never saw her back. Not even in a distance, as I thought a couple of times.
Once I tipped the shoulder of a Marilyn-Monroe-look-alike, and she turned, smiled a similar smile, what made the disappointment even bigger.
Thanks to her I saw countries I never would have seen, and experienced situations I never would have got into. I became a globetrotter, not because of a need, but as a quest for her.
Some chase careers, others a destination, but I… I chased the love of my youth for more then a lifetime.
I know she probably won’t be around anymore. Too many years have passed. I’m older then most, perhaps the last of a generation. And still I hope to see her once again. That’s all I still live for. The hope of her return with the same looks she left me, before I close my eyes, and the young nurse who always smiles when she enters the room, will cover my face with a sheet. Then the longing will be over. But maybe that’s the secret: to meet again in afterlife…
Gepost door Joachim op 03:08 0 reacties

It's a while ago

Finally back on the net. In the mean time it is 2012, a new year, and from here I thank all my followers and give them my respect for their patience.
With two playing cats around my feet it is impossible to think and write, that's why I decide to publish a short story about them, as a welcome back, and happy new year to all of you. A story in Dutch, which I wrote some months ago. I may translate it later, who knows... Just to practice my brains and wrists, and celebrate that I spend my thoughts on the Internet again. 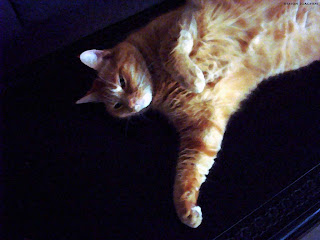